Mark Johnson provides a behind the scenes look at America’s top cycling team, Garmin-Cervelo, on Thursday, June 28 at CycleMania.

Portland, ME — June 26, 2012 — Mark Johnson, author of the new book Argyle Armada: Behind the Scenes of the Pro Cycling Life delivers will speak on the eve of the 2012 Tour de France at CycleMania at 59 Federal Street in Portland, Maine on Thursday, June 28 at 6:30 PM. Argyle Armada provides an unprecedented look inside the sport and lifestyle of professional cycling.

Embedded with Team Garmin-Cervélo, aka “Argyle Armada,” for its 2011 season, writer-photographer Mark Johnson brilliantly chronicles the team’s most intimate personal dramas and public celebrations. From winter training camp on the cobbled lanes of medieval Girona, Spain, to hard-earned stage victories in July’s Tour de France, to flesh-shredding crashes at the Vuelta a España in September, Argyle Armada brings the life and work of a pro cycling team into focus through incisive writing and spectacular color photographs. The book is now available in bookstores and bike shops and online.

“We are excited to have Mark present to the Portland Velo Club and other interested cyclists,” said David Brink, co-owner of CycleMania. “Mark is just back from the Giro d’Italia, the Italian version of the Tour de France, where he witnesses Garmin-Baracuda racer Ryder Hesjedal win. He is promising an updated inside look at the team with photography and stories not featured in the book. All are welcome to attend.”

More than a book about racing, Argyle Armada is a portrait of life as a member of a pro cycling team during a time of painful transition for the sport. Johnson unveils the dramatic forces that Garmin-Cervélo must navigate as team founder Jonathan Vaughters tries to push forward his vision of a reformed sport. Along the way, countless difficult decisions must be made to keep the team competitive in the chase for ProTour points, money, respect, and fame.

With all-access insight and spectacular color images, Argyle Armada is a backstage pass to the world of professional cycling. RSVP at https://www.facebook.com/events/475957412430077/.

Mark Johnson has covered cycling as a writer and photographer for national and international publications since the 1980s. His work has been published in cycling magazines including VeloNews in the United States, Cycling Weekly in the UK, Velo in France, and Ride Cycling Review in Australia as well as general-interest publications including the Wall Street Journal and the San Diego Union-Tribune. A Category II road cyclist, Mark has also bicycled across the United States twice and completed an Ironman® triathlon. He has a PhD in English literature from Boston University and has worked as a freelance writer and photographer for the Slipstream Sports cycling team since 2007. His other passion is surfing, which he does frequently from his home in Del Mar, California.

VeloPress publishes books for cyclists, triathletes, and runners on training, nutrition, and the histories and personalities of endurance sports. VeloPress is a division of Competitor Group, which publishes Velo, Triathlete, Inside Triathlon, and Competitor magazines and produces the Rock ‘n’ Roll Marathon series, TriRock triathlon series, and the Muddy Buddy adventure race series.

Cyclemania in conjunction with Bontrager Helmets is offering special pricing on these incredible helmets. Price is regularly $100 but Portland Velo Members can purchase these helmets at the incredible price of $65.00.

Women’s Helmet is black/blue and offered in two sizes – small and medium:

Men’s Helmet is white and offered in three sizes – small, medium and large: 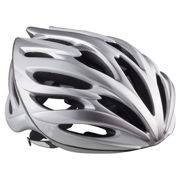 Please submit your orders with Cyclemania by December 17th. Cash, check and credit is accepted for payment.

New Gloucester proved to be a true test of bike handling skills  with the amount of mud and grass accumulation on the bike. Equipment failure seemed to be standard for the day with close to 25% of the cat 4 field DNF with broken dérailleur and hanger combination. The weight of most bikes was 10-12 pounds heavier than when the race began. Even after a post-race wash there was still 1/2 pound of grass in my drive train.

Anyway, the weather was typical fall condition, a tad on the warm side (55 degrees) but very wet in the field sections. The cat 4 race began up the paved hill into a right hand turn. I had started the day with close to 40 psi in both tires, not thinking the early grass sections would be slippery. This hypothesis proved incorrect as I was first into the turn onto grass and proceeded to crash into the first off-camber hill. Reacting quickly I was able to get back on the bike without losing my position. After a brief exchange of positions with a rider from Colby/Kissena Cycling club, I took the lead again and tried to open a gap.

I was able to put 30 seconds between myself and Chris Syer from Bikeman.com for the next few laps. As I was coming around for another lap I saw that the officials were in the process of changing lap cards and I was unsure where we were in the race. I heard the bell lap over my shoulder and tried to focus on not “fading” on the last lap.
It was really encouraging to hear all the OA riders behind the tape cheering and encouraging their teammates. Paul Weiss was offering some great advice as I was passing by “only critical shifts, only when necessary”. Seeing the amount of bike attrition that day, this was definitely important. I was able to spin the remainder of the last lap with minimal shifting and was able to enjoy the gap I created and coasted home in first place. My first place finish yet this year. After taking two second places at Gloucester and CascoBay races, this was a much enjoyed bonus.

I hope this qualifies for an upgrade so that I can join the ranks of the Masters 35+ field. Thanks again OA folks for coming and watching and cheering for the “early race”.